The 45th WorldSkills Competition opens in spectacular style in Kazan 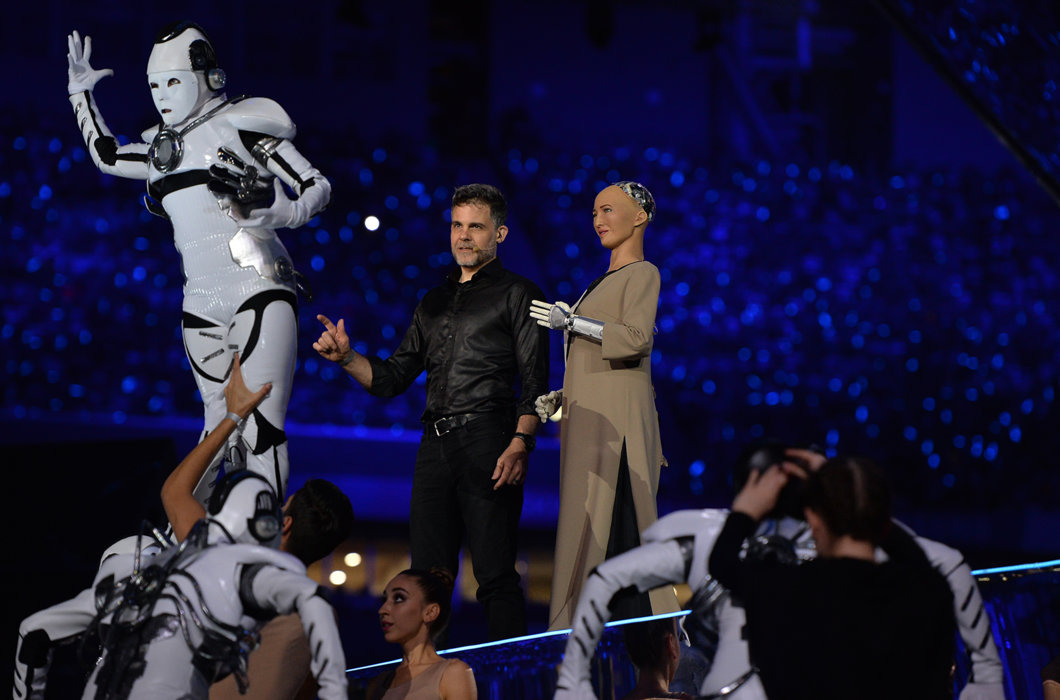 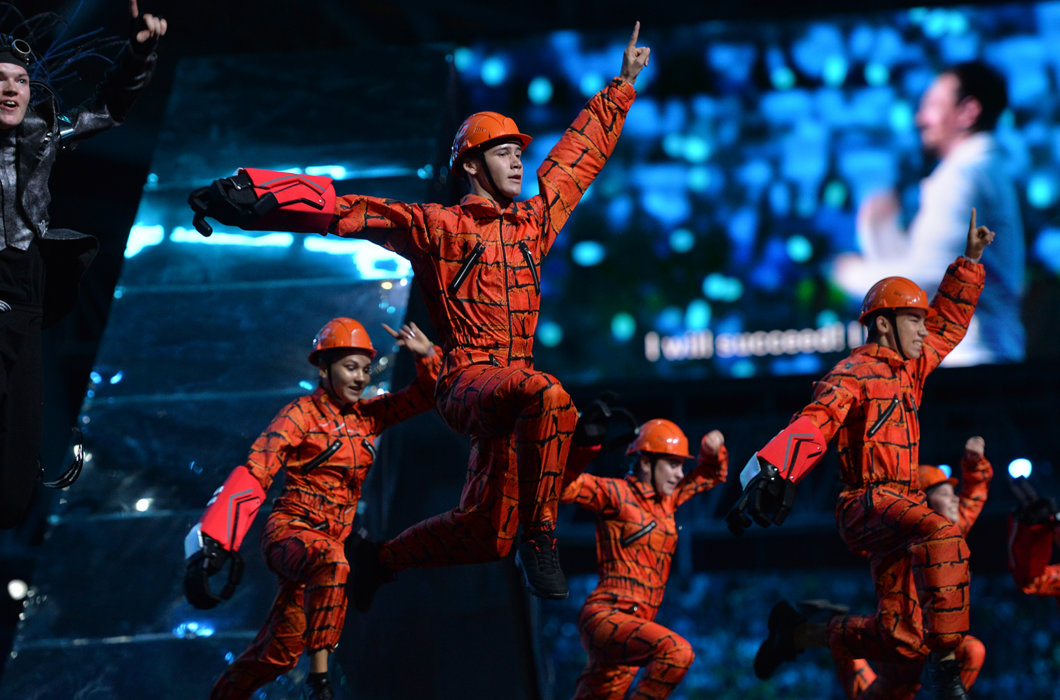 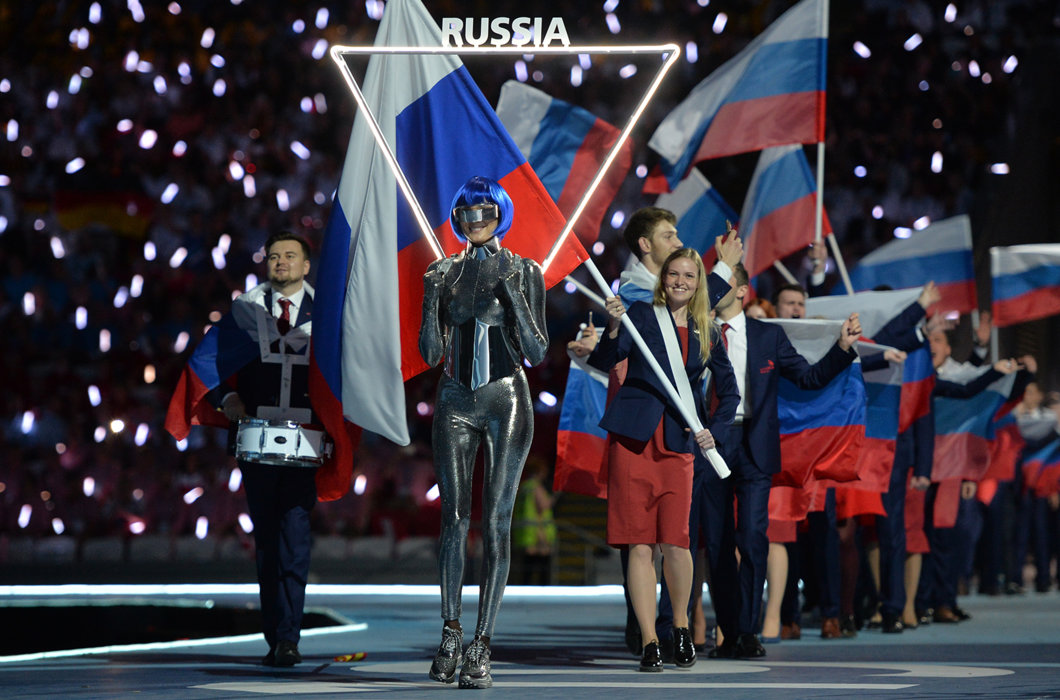 More than 1,300 competitors, 3,500 volunteers, and WorldSkills leaders joined spectators at the Kazan Arena Stadium for an exciting start to WorldSkills Kazan 2019.

At the beginning of the show, the audience saw a number of milestones in the history of the WorldSkills movement, starting with the inaugural Competition that took place in Madrid, Spain, in 1950. A moment was dedicated for each country or city who has played host to previous competitions.

Dmitry Medvedev, Prime Minister of the Russian Federation, welcomed the guests and participants of the Competition, followed by Simon Bartley, President of WorldSkills International.

After the official speeches, the Parade of Nations walked an honorary lap round the stadium led by ten WorldSkills Champions Trust members carrying the WorldSkills Flag. They were followed by representatives of the 63 competing Member countries and regions, organized in alphabetical order, while the anthem of Russia was performed by the Kazan Chamber Orchestra.

“The WorldSkills Kazan 2019 Opening Ceremony became an important event not only in the history of Russia, but for all the world competitions,” said Leyla Fazleeva, Deputy Prime Minister of the Republic of Tatarstan.

An atmosphere of mightiness and the power of labour was created on the main stage of the Ceremony, where a monument was installed, a futuristic construction embodying the human body with the hands thrust into the air – the Creative Man.

The stage helped bring to life the creators’ ambitious vision: the introduction of the competition’s skills in the form of a musical. “The Ceremony is an interactive show featuring several episodes illustrating the stages of becoming a professional,” said the Team Leader for the WorldSkills Kazan 2019 Opening and Closing Ceremonies and Cultural Programme.

Six groups of artists represented WorldSkills Kazan 2019 skills which are divided into six sectors. With the help of songs, the audience learned about each of the six skill sectors, their purpose and value.

In the finale of this part of the show, all of the artists touched the monument in unison, bringing it to “life”: it was now ready to share the secret of skills excellence with young professionals. The warmth of the human touch was the key to achieving excellence. It was a subtle reference to the WorldSkills logo that represents the hands of a man.

“The delivery of the WorldSkills Kazan 2019 Ceremonies has become a true challenge for our team. We have tried to implement in the Ceremony the most ambitious technology of our time, that’s why we have invited those who have relevant practical experience that can change the lifestyle of each of us,” said Alexey Sechenov, the Director of the Ceremony.

“While inventors of a smartwatch or android are talking about technology, the baker is making bread – such scenes are unfolding right in front of the spectators. Different epochs will find harmony in the artistic environment of the Ceremony. We want the audience not only to aesthetically enjoy the show, but also to give the challenges of the present days some thought and to conjure up our life in 10, 50, and even 100 years.”

What makes one a master?

The audience was invited to participate in the search for the true meaning of mastership, along with the actors of The Pulse show in which theatre met state-of-the-art technologies.

The makers of the show focused on unlocking the secrets of mastering the skills. They showed four phases of the creative process: learning, experiment, excellence, and creation. Each phase involved a professional speaker with internationally-recognized achievements sharing their story, accompanied by a choreographed number and live augmented reality effects.

A display of the traditional bread making equipment could be seen moving along the perimeter of the stadium on the route of the Parade of Nations. A manual millstone, a wood-fired oven, rollers for kneading dough, tables, and benches were amongst the equipment.

The first episode of the show, Learning, was accompanied with dance, expressing the moments of an idea being born, developed, and soaring, while Alexander Panayotov and Dana Sokolova performed.

Simultaneously, a speech was given by Anna Prokopenya, a 25-year-old confectioner from Ekaterinburg (Russia). She is the first Russian to enter WorldSkills Champions Trust and will motivate the Champions of the previous Competitions in the further development of the movement.

Anna spoke about her professional evolvement and what drives her to be part of the WorldSkills Champions Trust. “Let's use the power of skills to build the world we want.”

In the Experiment episode, Pranav Mistry explained his story. He is an inventor, Global Senior Vice President of Research at Samsung, and one of the most popular TED speakers. The dancers inside the rotating cubes demonstrated the transformation of an idea to the song performed by singer Yolka. The finale of the dance symbolized the apogee of the experiment, the readiness of an idea to be realized. Russian VR artist Denis Semenov pictured the experiment as a virtual box with Schroedinger’s cat inside – a famous paradox, having been thrilling the brains for almost 100 years.

Excellence and the ability to change contribute to the historical and cultural evolution of mankind. This was the key idea of the third episode. The topic of Excellence was unfolded by Ekaterina Bereziy, Russian entrepreneur, co-owner of the project for exoskeletons for people of limited mobility. “As pioneers in this field, we have chosen a complicated path. It is not enough to make an exoskeleton, you need to make this technology available for all. Meaning, to change the world,” said Ekaterina.

The pinnacle of the show was the outcome of consistent training. Uniting their skills, the dancers formed a single figure in the finale of the episode. The episode was accompanied by a huge virtual picture of a whale swimming around the stadium. The installation was created by VR artist Martin Nebelong. Singer Yang Ge, participant in the sixth edition of The Voice Russian TV show , and Jukebox Trio performed a song about excellence that comes with experience.

In the final episode, Creation, the robot Sophia addressed the spectators. Two years earlier Sophia became the first robot to be granted citizenship and holds a passport from Saudi Arabia. “Technology is merely a tool for studying the world. Together we can cover interstellar distances and create a flourishing and harmonious future for all,” Sophia said as she shared her view on the development of the relationship between robots and mankind.

American robotics designer David Hanson, the creator of Sophia, asked the viewers what did they think if handwork will stay or disappear in the era of information, virtual reality, robots, and new discoveries boggling the mind. The Ceremony viewers gave their answers by electronic voting.

The artists on the stage showed the phases of interaction between man, robot, and progress. In the finale, the dancing robots gave hugs to their creators, demonstrating their ability to feel, which Hanson and his team are attempting to develop in their creations.

If the robot sees beauty, it means it has feelings and can feel. This is the idea of the virtual picture by VR artist Anna Zhilyaeva. A monument then appeared in front of the audience and a pink flower came into blossom, the petals of which were hovering over the stadium. Russian band Therr Maitz performed the theme music.

Then a video telling about a secret cave appeared on the monument. A girl entered the cave and established the connection between the generations, bringing her hand closer to the image of the palm engraved on the cave’s wall by the people who had lived there dozens of thousands of years ago. The real cave is in Castellón province in Spain, which became the prototype of the location.

In the finale of the show, the dancers opened the monument by a touch of it. The monument exposed four figures keeping the clue in their hands – toolboxes, the essential start to a path of professionalism. The Opening Ceremony song was performed by Iv Nabiev, Nikolay Drozdovskiy, Taras Stanin, Seseg Khapsasova, Tais Urumidis, and Natalya Bystrova.

In this final moment, the baking of a loaf of bread was over, and the baker presented this symbol of the Russian hospitality to WorldSkills International representatives.

Then three experts and three competitors took oaths in their native languages. The 45th WorldSkills Competition was officially underway.

The Opening Ceremony was brought to a close by raising the official WorldSkills flag while the audience listened to the anthem and watched the fireworks.